Last month, lots of people working within the tech industry (Software Engineering, specifically) contributed to a trend on Twitter where they shared their personal response to 5 important facts related to their professional journey (1. Education, 2. Years in the game, 3. Job Title, 4. Working Location, 5. Salary). Personally, I thought this was a really positive endeavour as it set realistic expectations on a ton of different things that working in the tech industry as an Software engineer can bring. 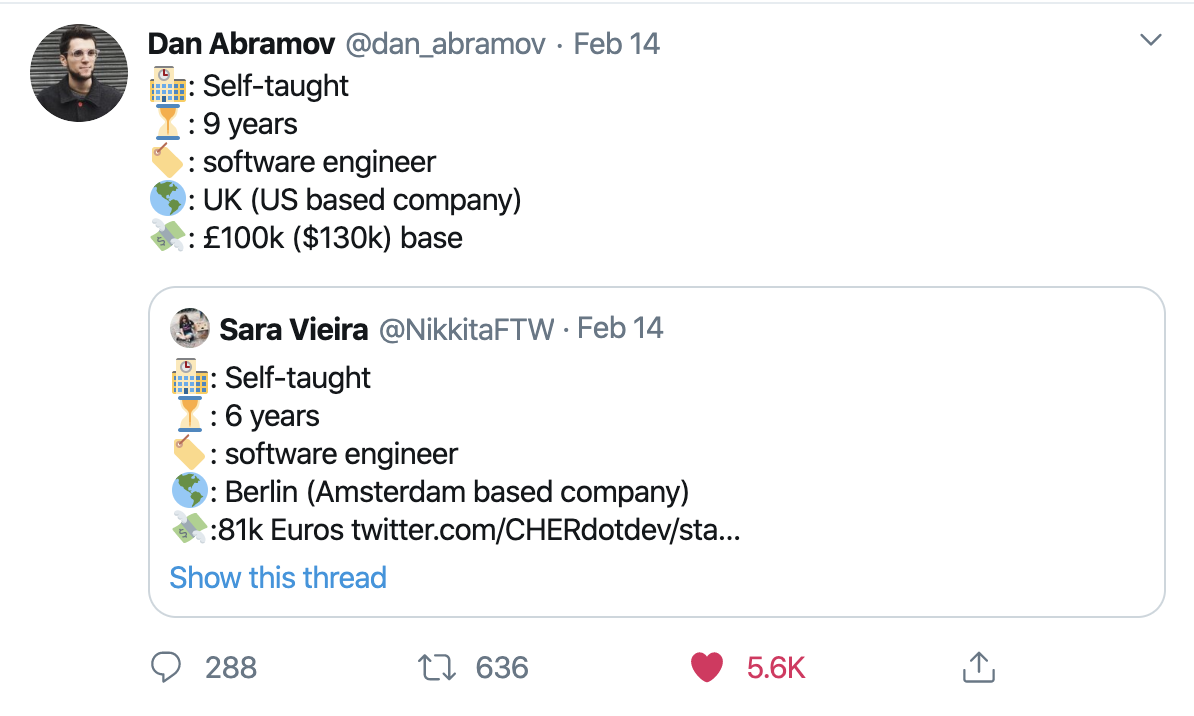 Providing such transparency like this helps break down barriers that have been built-up for years and I really believe that folks working as engineers in the industry right now are in such a prosperous position. Over the next few paragraphs, I’ll give my take on how I see things. It’s worth noting, I’m going to tailor my responses based on Software Engineering specifically, as that was what 90% of the tweets stated as their job titles. I did see a few tweets from project managers and scrum masters, etc, but I’m really not qualified to speak from that perspective. With that being said, here’s my two cents.

In most cases there used to be a requirement that for entry-level Software Engineering positions, a college degree was required. It didn’t necessarily need to be Computer Science, but a college degree was listed as a requirement in most advertised vacancies. It was almost considered a necessity to get your foot in the door. Personally, this suited me for a long time. Being the proud owner of a Computing degree, it felt right that I had the correct key required to unlock a career in the industry I’d studied for many years to join. However, in recent years, I’ve backtracked on that thought.

Attaining a college degree is a huge achievement. By completing a degree, you are proving that you can study and keep focussed to see something through - the combination of that commitment with an aptitude to learning is nothing to be disregarded. However, getting a degree doesn’t necessarily make someone a better Software engineer, compared to another aspiring engineer without one. Going to university comes at a cost - in most cases, students take on large debts to pay tuition fees and sustain a life whilst studying. Sometimes this can be offputting. In other cases, people might have other dependencies that don’t give them the chance to go to university despite being more than qualified. Even more, some people just don’t want to go into higher education - and that’s okay, too. College isn’t for everybody.

The biggest thing I want to make clear here is that the tide is changing. The need for college degrees isn’t as prominent as it once was and I think that’s a good thing. The barrier to entry for tech jobs is being removed via internships, code academies and a promotion of self-learning. By doing so, the pool of opportunity opens for many folks. I’ve read through countless tweets of very influencial people working in the tech industry that were listing their education as self-taught. In some cases, they might be self-taught and had a college degree in something else not related to Computer Science, etc, but in other cases, they didn’t have any degree at all. If it works for folks at large Software companies like Facebook and Twitter, it can work for anyone else.

Again, it’s worth re-iterating, I still value education and what a degree means, but I strongly believe those without qualifications shouldn’t be denied entry to a career in Software Engineering because they don’t have a graduation day photo, or plaque on the wall. This industry is changing and we’re seeing more people move into amazing careers, with degree or without. I’m all for this. Had I the chance to redo things, I’d have probably avoided going to college and really tried to self-learn, building applications myself with the intention of getting into a Software company via an internship or something that would let me work my way up in the company instead of leaving college in thousands of pounds worth of debt.

⏳ Years in the game

The tech industry can be a career for life. In the United Kingdom, the average person is expected to change their career 5 times in their lifetime. I can’t see this happening in Software unless folks deliberately seek a change. Software Engineering encapsulates so many different domains - Web Development, Mobile Development, Data Science, Security, Cloud Computing, Automated Intelligence, etc. There are so many areas to work in and too many for even the smartest, most productive folks to master.

From my own experience, I started with an interest in Web programming and quite quickly moved into Cloud Computing, but I know in the next few years my focus will shift to another medium within Software Engineering and that’s nothing but a good thing to me. If you’re passionate about working in technology, I think there’s a career for life on offer. Having the opportunities presented to folks in tech right now is an incredible prospect. Sadly, we’re seeing more and more traditional trades and careers evaporate due to modern-day enhancements, but it’s guaranteed for a long time yet that tech jobs, especially Software jobs, will be needed. This puts anyone currently working, or aspiring to, work in Software, in a fantastic position.

Within Software there are so many different positions available. Too many to list here. This is nothing but a good thing. It shows the levels of opportunity and space to grow that are out there. I think it’s highly motivating to work in an industry where you know you have opportunities to progress. Not every career has this extravagance. In many careers you could work for years on end without a promotion and feel very much like evolution is lacking. Software Engineering is different. Take for example a new hire at an entry level in a company. They normally join with a title of Associate or Junior Engineer and can see in front of them a career path up to Senior, Principal, Staff Engineer, Developer Advocate and above. This isn’t always the case, but in most larger companies, you can change your job title in a good cadence of time throughout your service there. Providing you put the work in, of course.

The tech industry is thriving right now and has been for some time. There are Software jobs on offer all across the world. However, a large number of technical professionals are not constrained to work in the country where their employer is based. A large number of companies offer remote working opportunities which means a lot of employees in tech can work from the comforts of their own homes, shared workspaces, etc, to do their job. I’ve read different threads on Twitter where folks have shared their experiences travelling the world whilst working remotely, which just proves if you have a computer, appropriate Software and a working internet connection - you can be just as productive in a different place each day as you would be seated at the same desk day in, day out, in an office of permanence. Again, not many careers would be able to support this type of flexibility. We are beyond fortunate.

Probably the biggest thing most people will consider when working in any industry is how much many they get paid. I don’t think Software Engineering is any different. Salaries in the industry are at an all-time high right now. With more and more companies trying their best to recruit the best possible candidates, it creates a competitive environment, which results in lots of companies paying high salaries for all sorts of positions across the Engineering spectrum.

One of the biggest takeaways I took from the sharing of these details on Twitter was different people’s reactions to when Dan Abramov of React notoriety, shared his facts and figures. He listed that his current salary was £100,000 per year and it seemed to spark widespread shock. I think the general perception was that someone working so prominently in the industry, being so visible and vocal, would’ve been paid a higher amount and plenty of folks made it clear that the consistency between different Engineering salaries was widely skewed. In Dan’s case, he was very transparent in explaining how he earned a generous salary for a Software engineer working in London (he does earn stock on top of his salary, too) and how it would take him to move across the world to most likely capatalize on a larger figure, if he really wanted it. This is another thing to really consider. If you are wanting to make a lot of money, it really depends on your location and negotiation skills. The opportunities are there if you really want them and are prepared to relocate, etc.

From my own experience, working as a Software engineer in Belfast, Northern Ireland, I can affirm that the industry pays well. I work in a city that’s going through a bit of tech boom right now, with lots of different companies setting up outfits looking for Software professionals. Salary figures certainly do vary, but on the whole, they are reasonably well-paying and it doesn’t require relocating to London or San Francisco. Credit to Dan for his honesty as he followed-up his tweet, explaining how he once struggled knowing others in the industry were being paid more than him for similar work, but over time it was something he was able to move past and let go. For me personally, I feel like that was something I once struggled with, too. Thankfully, I managed to let that go a long time ago. In recent times, similar to Dan, I’ve realised that this industry doesn’t really have rules when it comes to salary figures, but I can accept that most folks working in tech have the opportunity to earn a good living for themselves and their loved ones through their careers. If you are money-motivated, you will most likely earn a lot…and let me be clear, there is nothing wrong in it, if that’s your motivation. However, if you are motivated by learning and working hard also, you will find the money will follow, too.

Looking back, I hope I’ve relayed my take on things in a coherent message and this doesn’t come across as complete rambling. I believe firmly that what folks did on Twitter last month was a great thing. It helped stimulate lots of great conversations on Twitter, in the workplace, at home, etc, about what a career in Software can offer. I have many friends and family members who work in other industries and I’m amazed at what they do, and strangely most of them when discussing work are always curious about what my job entails. Sometimes I think we can take what we do as Software engineers for granted - we mightn’t always feel like the work we’re doing is making a difference, but when we take a step back, it can really help us take stock of what we do; solving problems with the intention of making people’s lives easier.

This industry has a long way to go. It’s not perfect. There are certainly many areas that need improving, but what we do have are a lot of positives to be thankful for. Like being able to get a job with/without college education, work in a thriving industry, wear many different hats and job titles, work from anywhere and sustain a good working income whilst doing all of the above. I welcome more transparency like this in the future and hope it can inspire more and more folks to jump at the opportunity of a career in Software Engineering.